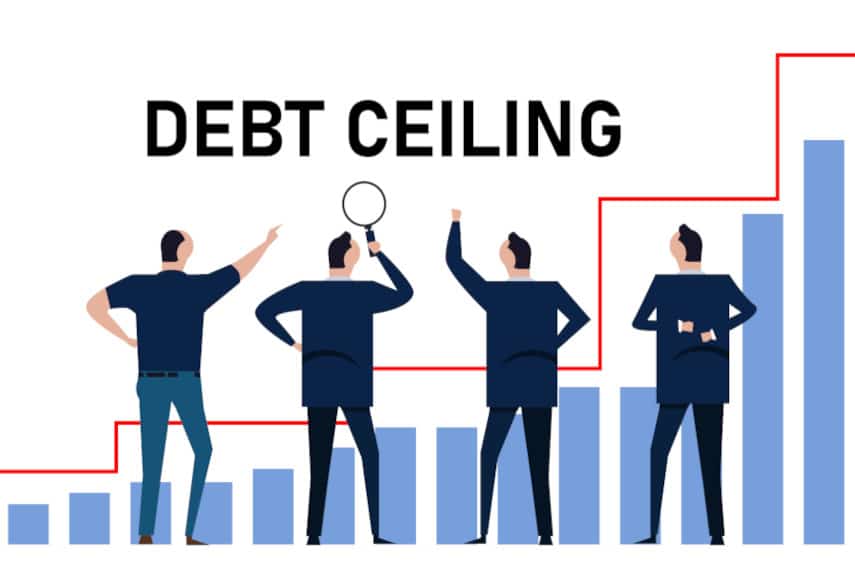 Death and taxes aren’t the only two things that are certain in life. The third is that Washington just can’t figure out how not to spend like a drunken sailor. Once again, the federal government has breached the debt limit and the US Treasury has had to resort to extraordinary measures in order to keep under the limit.

It’s been a while since we’ve had a knock-down, drag-out fight over the debt limit, but with split control of Congress and a White House that has signaled it’s not willing to negotiate, this fight over raising the debt limit could get contentious. Both sides seem to be digging in their heels, unwilling to give an inch. So how could this affect you?

Washington is so fixated on spending money on everything it wants that it doesn’t seem to care that it can’t keep within its means. And so we ended up with a $1.38 trillion deficit in FY 22. Even worse, the Biden administration pats itself on the back for these trillion-dollar deficits, as they’re far less than the deficits rung up during the COVID era.

Imagine the debt limit as being a credit limit on a credit card. And every time the government hits the limit, it asks the limit to be raised. Do you think you could get your bank to raise your credit limit every time you max it out? And if you never ever paid down your balance?

Effects of the Latest Breach

Now that the Treasury has begun taking measures to keep under the debt limit, how could this affect you? It all depends on how long Congress goes before raising the debt limit.

Just recently Treasury Secretary Yellen announced that Treasury would have to stop making contributions to the TSP’s G Fund, something that will affect federal employees, former federal employees, and federal retirees. They’re supposed to be made whole again once the debt ceiling is raised, but in the meantime things could get a little dicey.

All of these measures give Treasury a few hundred billion dollars of headspace to operate, since tax payments are going to start flooding in right now through Tax Day, providing the government with a little boost of liquidity. But Treasury can only go so long with these extraordinary measures. At some point something has to give.

The real question people have is, what will happen if Congress doesn’t raise the debt ceiling, or doesn’t raise it in time? What happens to all the people who just bought I-bonds, or who hold their money in money market funds that hold government bonds, or who increased their holdings of Treasury securities as they neared retirement because that’s what you’re “supposed” to do?

The federal government has only defaulted a handful of times on its debt, with the 1930s repudiation of gold redemption clauses being the most egregious. In the 1979 default, Treasury claimed that technical difficulties precluded redemption of bonds, and those bonds were quickly redeemed. But the damage had been done, and the government had to pay significantly higher interest rates as a result of that default.

In the debate surrounding the debt limit increase today you’ll probably hear things like “the US government has never defaulted on its debt,” which is completely false. But a default as a result of failing to raise the debt ceiling could have a significant negative impact.

The government would likely face a significant increase in the interest rates it would have to pay on future issuance of debt. That could drive up the federal government’s interest expense by hundreds of billions of dollars.

Foreign holders of Treasury bonds could also become nervous, particularly Japan, China, and the Middle East, which could result in them divesting themselves of some of their Treasury holdings to reduce their default risk. That too could result in higher interest rates.

Investors could face heightened uncertainty surrounding their holdings of US Treasury bonds, particularly if the debt ceiling increase is only a short-term increase. They would have to wonder if their Treasury bond holdings really were “as good as gold” as many people like to make them out to be.

While no one wants to see Washington continuing to spend trillions of dollars it doesn’t have and driving this nation further into debt, no one wants to see the consequences when that debt is defaulted on. While that may likely happen at some point in the future, most people would prefer to keep kicking that can down the road, hoping that a debt default doesn’t occur within their lifetimes.

Many people in this country move a larger portion of their savings into bonds as they near retirement, as bonds have traditionally been viewed as less risky than stocks as an investment class. But as last year’s performance of bond funds showed, and as this year’s debt limit crisis demonstrates, that isn’t necessarily always the case. Like a lot of assets, bonds are perfectly fine, until they’re not.

There’s a good chance that you, too, are exposed to US Treasuries. If you don’t own them directly, then you may own funds that invest in Treasury bonds. So the prospect of a Treasury bond default could impact you.

While no one wants to believe that the US government would ever default on its obligations, a debt so massive with little chance of repayment in sight doesn’t exactly inspire confidence. And even those who don’t expect a default to happen within their lifetimes still sometimes try to protect themselves against that possibility. One way they’re doing that is by buying gold.

Gold has a reputation as a safe haven asset and an inflation hedge. It maintains its purchasing power over time, and gains value versus the dollar. Whereas the dollar has lost 97% of its value since 1913, gold has gained over 9,000%. And during the 1970s stagflation gold’s annualized gains were over 30% per year over the course of the decade.

Even better, you can purchase gold using existing retirement savings such as those in a 401(k), 403(b), TSP, IRA, or similar retirement account. So if fears of a debt ceiling default have you wanting to diversify away from Treasuries, you’re able to do that by rolling over or transferring assets tax-free into a gold IRA.

If you’ve worked hard for decades to build up your retirement savings, why let profligate spenders in Washington put your blood, sweat, and tears at risk? Call Goldco today to learn more about how a gold IRA can help you safeguard your savings.