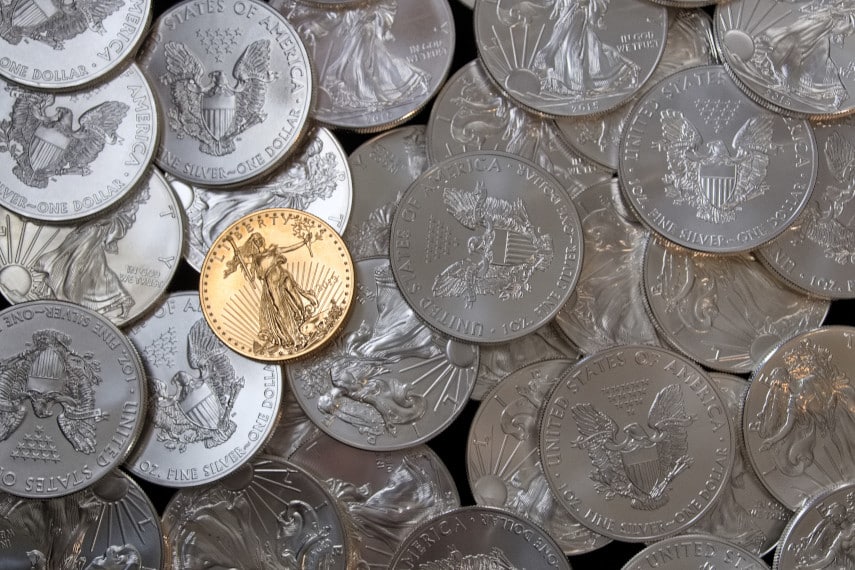 Over the past several years you’ve probably heard the phrase “buy the dip.” Normally that’s in reference to stocks, as part of a strategy of dollar cost averaging. But have you ever heard that phrase used when referring to gold and silver?

If not, maybe it’s time that should become a thing. It isn’t every day that gold and silver “go on sale,” because the general trend of their prices over the long term is normally upward. So when prices retrench and reach levels that we haven’t seen in a while, maybe it’s time to start thinking about buying.

Gold and Silver Are Cheap

Gold and silver prices are at levels we haven’t seen in over a year, and this could be a great time to buy. Chinese consumers are doing that, taking advantage of low prices to boost their holdings of gold.

Some sellers in Beijing say that sales are up 20% so far, with interest in gold nearly doubling. That mirrors a lot of what’s going on in the US too, and for good reason.

China is in the midst of a real estate crisis, with many Chinese homebuyers refusing to make payments on mortgages on houses that haven’t been finished. The Chinese real estate market is a little unusual in that respect, as homebuyers pre-buy homes, then begin mortgage payments before the homes are built, with those funds then being used by homebuilders to fund construction.

Frustrated Chinese homebuyers have begun to stop payments in protest until their homes are completed, worried that they’re paying money for nothing. In some ways this is bringing back memories of 2008 and 2009, when US homeowners who were underwater on their mortgages walked away from their houses and mailed the keys back to their banks.

The real estate market in the US is itself beginning to show shades of 2008 as well, with both housing markets and mortgage markets seeing significant slowdowns that raise the real question of whether the US economy is already in recession.

Mortgage demand is at the lowest level it has been in over 20 years, hammered by rising interest rates that are pushing up close to 6%. Existing home sales are down over 14% year on year. And homebuilder sentiment just saw the second biggest drop it ever has seen since 1985.

We could be on the cusp of a housing market collapse that makes 2008 seem like nothing, but it’s almost as though outside the housing industry and some major banks, no one seems to know or care. And that lack of caring could come back to bite them.

Get Ahead of the Curve

If you’re reading this article, it’s probably because you see just what’s going on, and what’s going wrong. You’ve seen how inflation is impacting the economy, how consumers are tapped out, and how businesses are starting to see slowdowns. But knowledge of what’s going on is one thing, and applying that knowledge and putting it into action is another.

The 2008 financial crisis was a wake-up call for many people, as they saw the US economy tanking and didn’t know how to react. Many watched as the funds they had built up for decades lost over half their value. And many vowed not to let that happen to them again.

During the same time period that markets lost over half their value, gold gained over 25%, making it a bright spot during a time of tremendous uncertainty. Now that we’re seeing many parallels to 2008, could gold once again prove to be a safe haven?

Paradoxically, the low prices of gold and silver right now may be one reason this could be the time to buy. While gold gained 25% from October 2007 to March 2009, it lost over 30% at one point during 2008, as market panics caused many investors to sell any assets they could to come up with quick cash. But gold rebounded, began diverging from markets, and took off to set all-time highs within a few years.

2022 so far is looking eerily similar to 2008, with the same weakness in markets, the same drops in precious metals prices, and the same inability of many analysts and policymakers to come to grips with the fact that the economy is in bad shape and headed toward recession. And if gold and silver prices so far are tracking the same way they did during the 2008 crisis, there’s every reason to believe that prices will rebound by the end of the year and continue increasing in the coming years.

Many thousands of people have already decided to start protecting their wealth with gold and silver. They remember the performance of gold and silver in the aftermath of the financial crisis, and they want to make sure that they don’t fall victim to the next crisis.

Many of them decide to buy gold and silver through a gold IRA or silver IRA, investment vehicles that follow the same rules as any other IRA account, only that they hold physical gold and silver coins or bars. Funding a gold IRA or silver IRA is easy, with the option of a tax-free rollover or transfer from an existing 401(k), 403(b), TSP, IRA, or similar retirement account. That can allow you to protect your existing retirement savings with gold or silver, and without having to take a tax hit by liquidating your tax-advantaged retirement accounts.

If gold and silver prices are following the same trajectory that they were during the 2008 crisis, then the coming months could be one of the last times to get into precious metals before prices take off again. With rising inflation, a slowing economy, and the potential for recession, now is the time to make sure that your wealth stays secure no matter what the next few years may bring.

Don’t let your hard-earned assets fall victim to a coming crisis. Call Goldco today to find out how gold and silver can help you safeguard your savings.